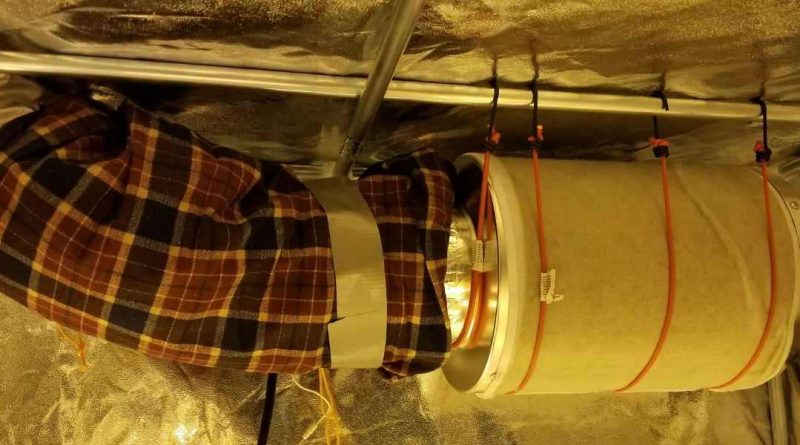 Vibration from inline fans is a common complaint for marijuana growers. Exhaust fans mounted directly to walls and ceilings will transfer this vibration, amplifying it.

To resolve the problem of too much fan vibration, most growers suspend the fans using elastic bungee cords. Wrap a few bungee cords underneath and attach to hooks that are mounted in the ceiling. The elastic will absorb these vibrations and you will no longer have to deal with a rattling fan even when run at full speed.

Some growers will build an insulated box around their fan to completely eliminate motor hum. While effective, its not necessary in most cases if you use the right fan controller to run the motor at a lower speed. That combined with muffling the sound of moving air are the first things you should address. Worry about completely blocking the fan’s noise only if you determine its still needed after insulating the venting and running the fan at a lower speed.

The noise of rushing air through venting can contribute to a large part of the noise in your grow room. This noise is more pronounced if you have a powerful fan and lots of angles in your vent run.

Try to plan your vent run to be as short and straight as possible. It will increase the efficiency of your setup and allow you to use a less powerful fan.  Short and straight venting is also much easier to insulate than long, rambling runs or those with lots of curves.

There are several inexpensive options for reducing air flow:

Not pretty, but blankets or towels folded lots of times are great ways for budget-minded growers to address the noise in air vents. Old sleeping bags would work well too. Get creative. This method works well for curved or angled runs.

To insulate the venting inside our grow area we didn’t want to risk having insulation fibers ruining our crop, so we used an old blanket wrapped around the venting several times and it works great.

Addressing curved runs is somewhat problematic with insulated sleeves.  They aren’t as easily flexible as using cloth blankets. Plus installation is compounded by the release of fiberglass fibers, which will undoubtedly fall in your eyes and mouth if you’re installing them over your head. Wear eye protection and a low cost respiratory mask.

Avoid using fiberglass insulation inside your grow space, those fibers are bad news and you certainly won’t improve your bud quality if you’re smoking fiberglass unknowingly.

Air leaving a venting system at high speed will make a “whooshing” sound. To increase stealth, some growers buy a muffler that goes at the end of the run to silence the exiting air.  Mufflers start around $50. If you’re overly concerned about noise from exhaust, it’s a pretty reasonable investment.

One consideration if you haven’t yet bought your fan: running a 6 or 8 inch fan at lower speeds will mean less exit noise than if you have a 4 inch fan cranking full speed.

Fan controllers allow you to run fans at less than full speed, which greatly reduces vibration as well as noise from air movement.  Most inline fans used for marijuana growing don’t have different run speeds as would be seen in household window fans. Fan controllers can resolve this.

They’re not compatible with all fans either, so in general it’s not recommended to use them. But since initial cost is often a grower’s biggest consideration, if you do choose a solid state controller you need to make sure that it will work with your setups

Variac controllers start in the $60 range. Make sure to buy a unit with amp ratings that are well above the amp requirements for what you plan to run, and remember that when fans turned on there is a power surge so you’ll need to ensure the amp rating on your variable autotransformer is high enough for the fan you plan to run.  This is more of a concern for growers running multiple fans through the controller. Most 6 inch or 8 inch fans will be rated at under 1.5 amps and would have no problem running on a 3 amp 120 volt variable autotransformer.

Variable frequency drives (VFD) are the best choice to use as fan controllers in terms of how they operate. In a perfect world you should go with this option.

The circuitry in VFD controllers sense changes in the motor, which allows it to adjust the frequency and voltage of the AC source.  This maintains a constant tourque, something that voltage regulation cannot provide. 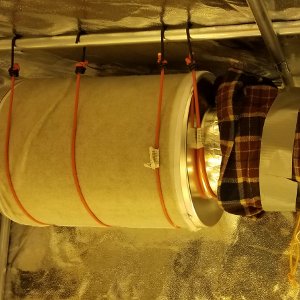 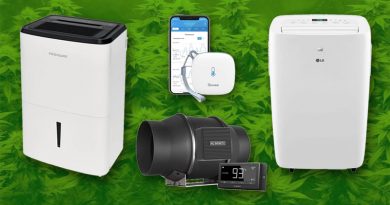 February 5, 2022 happy-pot-farmer-420 Comments Off on How to lower humidity in a grow tent 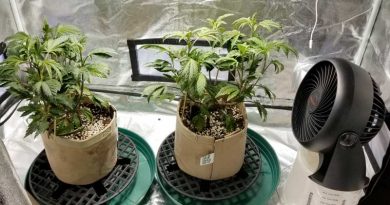 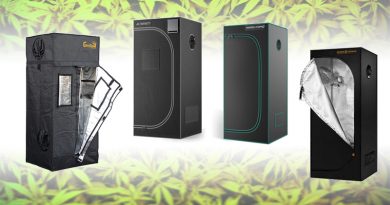 November 16, 2017 happy-pot-farmer-420 Comments Off on Best weed nutrients for new growers: How to select the best nutrients for growing cannabis
Growing Weed 101 Growing Weed in Coco Coir Propogation and Cloning

February 5, 2022 happy-pot-farmer-420 Comments Off on How to lower humidity in a grow tent
Featured Growing Weed 101 Harvesting

How to make a grow tent intake filter

March 31, 2020 Comments Off on How to make a grow tent intake filter