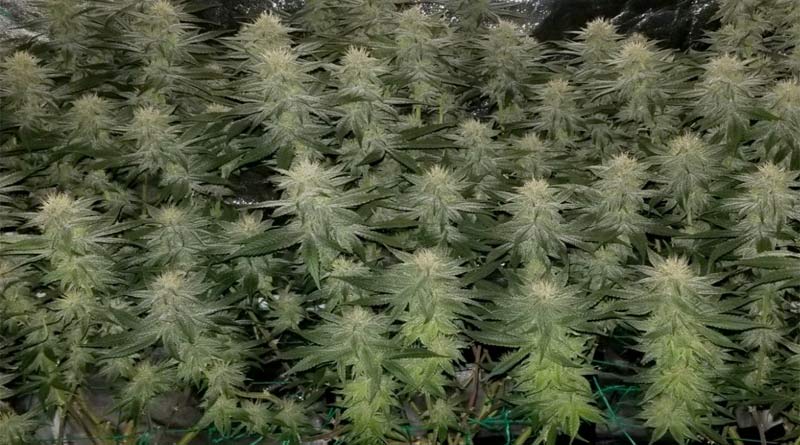 In this article we’ll discuss schwazzing cannabis plants and show you how to use the “Three a Light” book defoliation approach. We’ll try out schwazzing on some gorilla glue clones in an A/B test to see how this method of extreme defoliation compares to less aggressive lollipopping with moderate defoliation.

Schwazzing weed plants is a term used to describe heavy defoliation of cannabis fan leaves at 2 critical stages of the flowering cycle. This heavy defoliation allows for deep light penetration and focuses plant growth on bud sites to maximize yield.

The schwazzing technique involves a near complete defoliation of all fan leaves at the start of the switch to 12/12 lighting to induce flowering.

A second complete defoliation of the fan leaves occurs at the start of the 4th week of flower.

The technique can seem counter-intuitive since plants rely on fan leaves to fuel growth, and many new growers are hesitant to completely strip all the fan leaves. This is especially true for the second defoliation around day 21, as this is a time when bud formation is underway. But if you’re looking to schwazze marijuana plants you cannot shy — all of the fan leaves with a visible stem need to be removed.

To offset the stress on the plants, on the days when you defoliate you need to increase the ppm of your nutrient mix in order to see best results.

What is the point of schwazzing cannabis plants?

Extreme defoliation is meant to expose lower bud sites on the plants that typically would not get enough direct light to produce dense, high quality buds. This encourages the plant to focus more energy on those sites.

Many lower fan leaves that don’t receive direct light tend to be a drain on the overall plant rather than a producer of energy. Most growers remove lower fan leaves and shaded bud sites to avoid larfy popcorn bud. But schwazzing is indiscriminate – if it’s a fan leave, pull it off.

“Three a Light” by Josh Haupt

The term schwazzing originated in the book “Three a Light” that describes a process a grower named Josh Haupt uses to obtain yields of 3 pounds of weed per grow light.  At $500 this book is out of most beginning home growers’ budgets.  And the other techniques in the Three a Light book to increase yield aren’t exactly secrets — use high intensity lighting, supplement with carbon dioxide, and defoliate (heavily) at the right times. Most new growers would be better served spending that money on a higher quality grow light than dropping $5oo on a book.

To find out if schwazzing works we tried a few runs growing weed in a controlled side-by-side A/B test to compare how it worked against a less aggressive defoliation approach.

Early on as a first-time grower I overzealously removed fan leaves based on an article I had read on a web forum and another website. I heavily removed fan leaves, but didn’t consider the timing within the cannabis flowering cycle where the heavy defoliation would be most beneficial. The result was slightly stunted bud development and a little less yield than I would see on subsequent runs with the same line of AK-47 clones.

Over time through trial and error and lots of research I worked out a nice mix involving heavy defoliation as part of a screen of green (ScrOG) grow with heavily lollipops plant stems.

But for years I remained relatively cautious about removing too many fan leaves during mid flower, working under the commonly understood assumption that fan leads were solar panels to produce energy for the plant.

I never wanted to see any stray beams of light make it through the canopy to the floor of the grow tent, so I left that canopy thick enough to absorb it all. This approach is the one I still follow today. Allow for deep penetration into the lower canopy, but don’t waste the light.

To test out whether schwazzing works to increase yield and budt quality I set up an A/B test.  For this test I used a 600 W air-cooled cool tube lighting fixture with an XL hood with with a 6-inch fan in a 2×4 grow tent with 3 plants growing in coco coir with 30% perlite in 3 gallon fabric pots.

I used Canna Coco nutrient line including their A and B base nutrients, Cannazyme, Rhizotonic, Canna Boost  during flower, as well as their PK 13/14 supplement during mid- flower. The plants also received Cal-Mag Plus at 3 mg per gallon – in tap water around 200 ppm – along with Botanicare silica curing the vegetative stage.

A 600 W HPS is a strong grow light for a small 2×4 tent, but the temperatures were kept in check using the air-cooled light running through a 4 inch fan on a variac fan controller.  The environment’s temperature with the lights on was in the low seventies, and at night it with the lights off would drop into the high sixties due to the location in my basement.  The relative humidity range held between 40 and 60% for the duration of the grow.

To make it a fair experiment I decided to run the A/B test using schwazzing on the two end plants, since the one directly under the bulb which would receive more light intensity which would skew results.

I have grown the same clones of Gorilla Glue 4 a few runs before and found that it was a slightly heavier feeder than some of the other strains I had grown alongside it in the past. I have the Canna Coco feeding schedule pretty well dialed in at this point. For GG4 I used a few more ml per 5g bucket of Canna Coco A and B “light” feeding schedule.

The plants were all vegged out for 3 weeks, topped, pruned, and trained. After switching the lights to 12-12 to initiate flowering all three of the plants received a complete haircut, removing all major fan leaves.  All three cannabis plants continued to grow very well in the weeks following the initial defoliation at the start of flower — something I had done quite a bit of times before as part of my usual ScrOG/lollipop routine.  A nylon screen was used to train a flat, even canopy.

The variable introduced in the test plant was after the additional heavy defoliation on the start of the 4th week. By the 21st day after flowering began and the initial fan leave removal, new fan leaves have fully formed again and begin to shade out middle and lower bud sites. This was the first time I’d tried

There were some distinct advantages to heavily defoliating the plant on the right using the schwazzing method. By week 5 it was obvious that the lower bud sites on this plant which typically would be shaded had much stronger development compared to the less defoliated plants. Increases airflow was another benefit.

But I was very interested to see if the overall top cola development on the plant with less defoliation would produce thicker, denser buds than the colas on the side to the right that received the heavy defoliation. Would that energy loss through the removed leaves result in a stunted growth?

The results of the schwazzing experiment

The three plants completed an 8-and-a-half week flowering cycle, with a heavy flush (2 x 30 gallons) at the final 10 days and finished with just clean pH’d tap water and Canna Boost.

At the time of harvest, visual observation showed that the schwazzed and moderately defoliated plants had better lower bud formation and density due to lack of light.  All of the top buds across the ScrOG looked similar in quality. 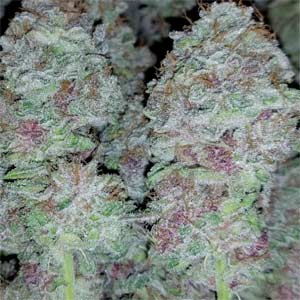 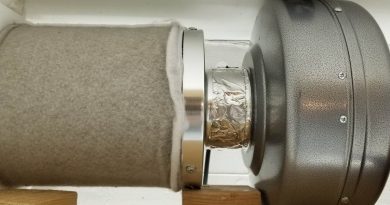 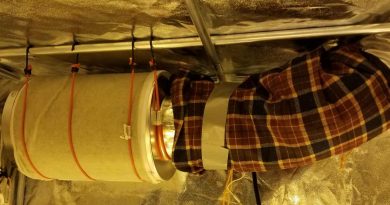 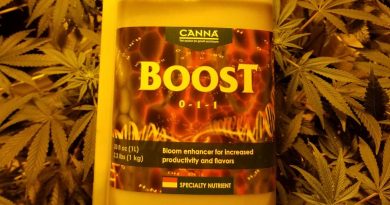 Is Canna Boost worth the money for growing marijuana in coco coir?

November 16, 2017 happy-pot-farmer-420 Comments Off on Is Canna Boost worth the money for growing marijuana in coco coir?
Controlling Climate Grow Rooms Grow Tents

November 16, 2017 happy-pot-farmer-420 Comments Off on How to reduce the noise from inline fans in marijuana grow rooms and tents

February 5, 2022 happy-pot-farmer-420 Comments Off on How to lower humidity in a grow tent
Grow Equipment Grow Tents

November 19, 2017 happy-pot-farmer-420 Comments Off on How to choose the best growing mediums for marijuana plants
Growing Weed 101

February 5, 2022 happy-pot-farmer-420 Comments Off on How to lower humidity in a grow tent
Growing Weed 101 Nutrients