Looking to cool a 6 inch air-cooled grow light with a 4 inch fan? Heres what I did when I found myself in a pinch and only have a 4″ inline fan to use with a 6″ air cooled grow light fixture in a small 2’x4′ grow tent environment.

Make sure to run enough air to properly cool your fixture

If you’re using a cool to or other air cooled fixture it’s important that you keep enough air moving through it to cool down the light adequately.

For example if you’re using a 1000 W HPS bulb and flowering in an air cooled fixture you should run a 6″ fan through that at full speed to ensure that enough heat is removed. This is especially important in cool tube fixtures which typically have glass that is very close to the bulb itself.

The small grow tent setup pictured uses a 600 W HPS so it’s not critical to run the fan at full speed therefore  the fan controller can be used.  But it’s better to overdo it than to risk having a bulb or the glass on your fixture overheat and crack.

A word of warning about odor control for air cooled light fixtures:

This fan set up pulled air through the fixture and was intended as a very short term solution used in the veg cycle only.

I would definitely not use this type of set up during flowering due to increased aromas: the position of the inline fan would suck air through the grow light fixture pulling in smelly unfiltered air through cracks within that fixture. This would bypass the carbon filter and stink up the exhausted air.

The solution? Push the air through the grow light.

If this were to be a more perminent set up the better thing to do would be to locate be in my fan on the opposite side of the grow light (before the fixture) so that it was pushing filtered air through the grow light. This would prevent any inadvertently unfiltered air from getting pulled through that fixture.

An even better solution would be to use the 2 fan system shown below.

While keeping a symbol fan set up is certainly one possible way to cool your lights, separating the fans lets you keep the heat that is removed from the light fixture within the grow room itself outside of the tent.

This is much more energy efficient then it would be to push all that hot air directly outside. If you’re grow tent or grow room is located in the cold basement area that certainly makes sense to try and retain that heat. But depending on where you’re growing it may be desirable in warm areas to use such a single fan system connected to the outside of your house so that the heat is constantly removed instead of been re-introduced inside.

Another advantage is reduce power usage.  The six inch fan attached to the air cooled lights can be powered by the same electrical timer used for the lights themselves, so it would only need to run when the lights are on.

Learn more about how to select a fan controller, 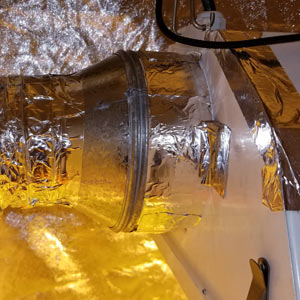 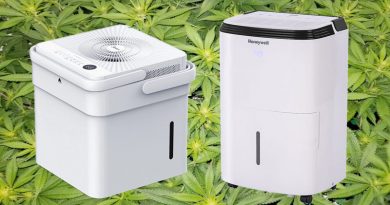 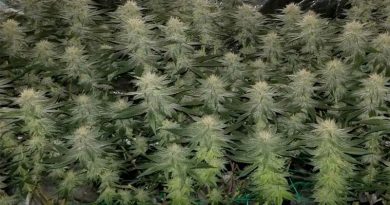 March 31, 2020 happy-pot-farmer-420 Comments Off on How to make an air intake filter for grow tents or grow rooms

It’s very important that you filter incoming air that’s being introduced into your grow tent or grow room. In this

May 5, 2021 happy-pot-farmer-420 Comments Off on What fans do I need for my grow tent?
Controlling Climate Grow Equipment Grow Tents

November 16, 2017 happy-pot-farmer-420 Comments Off on What is the best fan controller to quiet exhaust fans in marijuana grow tents?
Grow Tents

November 16, 2017 happy-pot-farmer-420 Comments Off on Coco cloning: how to clone marijuana plants in coco coir

Using coco coir to grow marijuana clones is one of the best ways to clone weedc plants.  Knowing how to

November 16, 2017 happy-pot-farmer-420 Comments Off on When to harvest weed: the best time to harvest marijuana
Drying and Curing Featured Growing Weed 101 Harvesting

November 16, 2017 happy-pot-farmer-420 Comments Off on How to design and build a marijuana grow room indoors
Growing Weed 101 Nutrients

Best gifts for stoners: The top 5 stoner gifts for him

October 16, 2021 happy-pot-farmer-420 Comments Off on Best gifts for stoners: The top 5 stoner gifts for him
Drying and Curing Growing Weed 101